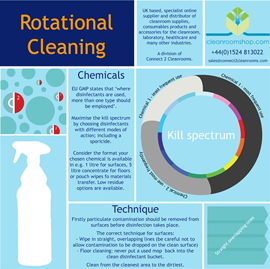 Why do I need to clean my cleanroom, it is already clean? What is rotational cleaning       and do I really need to go that far?  Why are there so many chemicals and how do they all work?  What chemicals should I use? As a Business Development Coordinator for a cleanroom consumables provider, I get asked questions like this every day.

To answer these questions I have asked for advice from experts, consulted the wealth of information there is available into micro-organism resistance and disinfectant mode of action, and read about the standards of cleanliness required to keep a cleanroom up to specification.  The article that follows, are the conclusions I have come to.

To answer the first question, yes of course you need to clean your cleanroom.  Although it probably looks clean, most of the particles that need removing are not visible to the naked eye.  Over time particles of dirt, cell debris, residues and such, will build up on the surfaces of the cleanroom and must be removed.  The ISO standard 14644-1 defines a cleanroom as:

“a room in which the concentration of airborne particles is controlled, and which is constructed and used in a manner to minimise the introduction, generation, and retention of particles inside the room and in which other relevant parameters, e.g. temperature, humidity, and pressure, are controlled as necessary”[10].

In cleaning your cleanroom, you are minimising the retention of particles inside the room. It is thought that the best technique to clean a surface in your clean room is a wet clean, which usually involves an impregnated wipe and a disinfectant or detergent solution.  The mechanical act of wiping a surface will remove a number of particles from that surface. If the wipe and surface are wet, this will break more of the bonds that hold particles to the surface and allow you to pick up many more particles.  Microbial control and EU GGMP Grade Cleanrooms

What is rotational cleaning then?  Rotational cleaning makes reference to the bioburden, which is the number of bacteria living on an un-sterilised surface.  With this type of cleaning, we are not just trying to remove particles of dirt, fluff, cell debris and such; we are also trying to remove and kill the living element of contamination, which are the micro-organisms that may be present.  In cleaning your cleanroom, you will undoubtedly remove a portion of the microbial population.  However, it is unlikely that you will remove it all, which is why we must take steps to kill any microbes which are not removed.

“The sanitation of clean areas is particularly important.  They should be cleaned thoroughly in accordance with a written programme.  Where disinfectants are used, more than one type should be employed.  Monitoring should be undertaken regularly in order to detect the development of resistant strains.” [6]

Why do we need to use more than 1 disinfectant?  The simple answer is to stop resistance.  There are 2 main types of resistance – naturally occurring resistance and selection for resistant strains.

Over time, bacteria that were once controlled by alcohols for example would develop a genetic resistance to that disinfectant, meaning it would no longer be an effective agent.  For this reason it has seemed advisable to use different disinfectants to try and prevent this from happening.  Although there does not seem to be any evidence to show this happening or even show the potential for this to happen, we still need to take precautions.

There are differences between the environment where MRSA developed and a cleanroom environment.  In simple terms, for resistance to develop, a few bacteria will just about survive a dose of whatever agent has been employed to kill that type of bacteria.  These bacteria then have the chance to multiply, and whatever advantage they had over other strains that allowed them to survive will be passed on, and you are left with a surviving strain which grows and thrives.

Again, a few of these bacteria will just about survive a dose of agent, multiply, and the advantage that allowed them to survive is passed on again and gets stronger.  This happens over and over with continued use of that same agent.  The advantage grows and grows, until you are left with a strain that it totally resistant to that agent.  In the cleanroom environment, because we tend to overdo the quantity and frequency of disinfectant use, very few microbes actually do survive. This means that it is unlikely that selection for resistant strains will occur.  Also, antibiotics have a very specific and targeted action which makes selection more likely.  Disinfectants have a very broad action which means it will be less likely that selection can take place.

The process of selection for resistant strains is developed and is gradual.  The resistance is not inherent in that organism.  This is the main difference between this type of resistance and the naturally occurring resistance.

Naturally occurring resistance is due to the fact that as disinfectants work in different ways, they have different modes of action.  This means that they are not all equally as effective at killing all microbes.  Some may be very effective against bacteria but not fungi, whereas some may be effective against viruses but not endospores.

Due to the way that disinfectants kill, some micro-organisms will naturally be better able to resist their actions.  This is not learned, selected for, or genetically passed on, it is down to the nature of the micro-organism itself and the properties it already had.  In the same way that tall humans may naturally be better at basketball; they didn’t learn to be good, or have any better understanding of the game which was passed on by their parents; they just happen to be closer to the hoop!

Alcohol based disinfectants tend to be effective against most micro-organisms, but not endospores.  Their mode of action is to denature proteins in the cell which can cause them to clump together and lose their function.  When this happens to the cell wall it can lose structure and collapse.

Quaternary Ammonium Compounds (QACs or Quats) work by causing disorganisation of the cell membrane and the cell’s insides leak out and degrade.  They are effective against bacteria, enveloped viruses and fungi, but have little activity on non-enveloped viruses or endospores.

Biguanides alter the permeability of the cell membrane.  They can damage the outer layers and attack the inner layers and this will also cause leakage.  They have similar effects to the Quats.

Hydrogen Peroxide is highly reactive and acts as an oxidant, producing free hydroxyl radicals.  These free radicals can then attack the essential cell components.  Hydrogen Peroxide based disinfectants tend to kill everything including endospores, but this kind of disinfectant is very harsh on the surfaces it cleans.

Endospores are extremely difficult to kill.  The endospore is a state that a bacteria or virus can enter into when conditions are unfavourable, for example lack of food, lack of water or nutrients, temperature or ph. changes.  They build an ultra-strong coat around the cell’s nucleus and essential parts to protect it.  They can remain in this dormant state until conditions improve, when the coat will break down and the cell returns to normal.

This strong coat means that in this state the endospore can be very difficult to kill, as it will resist the effects of gamma irradiation and many disinfectants.  Chlorines and Hydrogen Peroxide are two disinfectants that do have an effect on endospores, and are often referred to as sporicidal.  Chlorines can increase the permeability of the endospore coat and Hydrogen Peroxide can remove proteins from the coat.

Using different disinfectants will increase your kill spectrum.  This is the total portion of the microbial population that you are able to kill.  It can be helpful to think of the kill spectrum in a similar way to the light spectrum.  If you only ever consider visible light, you are missing out a huge portion of the light spectrum, what about X-rays and UV rays?  In the same way, if you only ever use disinfectants that kill bacteria, you are not doing anything to combat endospores and other types of micro-organisms.  We need to try and select disinfectants that when used in rotation cover as much of the spectrum as possible, therefore increasing your kill spectrum as much as possible.

We also must consider that if we only use a disinfectant that kills bacteria but not viruses, we are creating the conditions for viruses to thrive.  We are creating an environment where viruses will flourish, and the disinfectant we have chosen to try and prevent this from happening will be unable to make an impact.

What disinfectants should you use?  It is clear that using a sporicide is highly important, but agents that have sporicidal activity tend to be harsh and unacceptable for everyday use.  For this reason it is recommended that a sporicide is used in rotation with another effective disinfectant that is more suitable for regular use.  It would also be advisable to use an alcohol as well, as they have good efficacy against most microbes and can also remove any residues that may build up from using other disinfectants.

In conclusion, you need to keep your cleanroom clean to minimise the retention of particles inside the room, as stated in the ISO standard 14644-1.  Rotational cleaning is the use of more than one disinfectant in rotation to control the bioburden in your cleanroom.

We use different types of disinfectant with different active chemicals because they have different modes of action.  This means that they are effective against different types of microbe, and using more than 1 allows you to maximise your kill spectrum.  There are many factors which will affect the type and frequency of disinfectant you choose to use including your process and cleanroom class, residues, what format it is available in, how easy it is to use and the environmental impact, amongst others.  So, as a guide it seems sensible to rotate 3 agents - an alcohol, another general disinfectant and a sporicide.

If you have any comments about this article please email Rebecca Smith at rebecca@connect2cleanrooms.com.